The multilateralism of the future

Today, we celebrate the International Day of Multilateralism and
Diplomacy for peace. The UN Association Switzerland was able to talk to Francesco Pisano, Director of Library and Archives at the UN in Geneva, about the role of multilateralism in the future and how Switzerland can contribute to the UN.

What role can multilateral organizations play in today’s world? 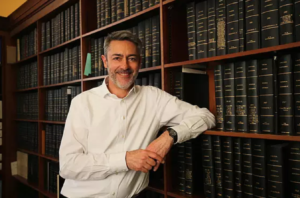 I believe that the time for true multilateralism is now. Never before have we felt the need for collective intelligence and international cooperation more than we do now. After an era of competitive economic growth, our civilization is transitioning to a new phase where we must confront challenges we haven’t seen in the past. As we figure this transition, we must accept that we need a new approach: one based mutual support ad a renewed pact with the planet so that we can solve global problems that are clearly becoming existential threats.

In this new phase, we must also rediscover the values that keep us together and grow wiser as human beings. I believe international organizations are indispensable now and in the future. This is why we need to stop being complacent and work together to bring out the best version of each of the organizations we already have. We must work harder to make them fit for future or else we will have to replace them at a greater cost.

In which direction is multilateralism evolving? How do you see the
future of multilateralism?
Multilateralism is in full transition. The version we know today has served us well for over 100 years. During all this time we have used it mainly to support globalization and competitive economic growth, which has generated wealth at the price of high externalities like inequalities, conflicts, nuclear arsenals, and of course climate change. As the challenges we face as a species change, the wise thing to do is to adapt the multilateral system we use.

If we want to maintain multilateralism as a set of shared values and rules for all members of the international community, we must shift our mindset to give priority to global problems over competing national interests. Then we
must become intentional about redesigning the systems we use and decide to operate them based on a collective vision of a better world for all. This time around, not only nation states, but also the peoples and everyone willing to participate must be part of the discussion. Because multilateralism affects everyone, each of us has a role to play and technology enables us to be individually involved. In addition, because the decisions we take today craft the world of tomorrow, young people must have the best seats at the table, instead of the back benches. The multilateralism of the future will be networked, participatory and inclusive, and it will be based on collaboration and shared values. The sooner we design a system that supports these functionalities, the less future generations will have to pay for the delay.

Switzerland has been a member of the United Nations for 19 years, how important is multilateralism for a country like Switzerland? On the other hand, what does Switzerland contribute to the UN? What is or could
be its “unique selling point”?
Being part of the UN is clearly important to the Swiss people, after all we chose by democratic vote to join the Organization. There is more: small countries need multilateralism because it brings safety and opportunities. International cooperation has great value for nations who otherwise would have less chances to make their voices heard in the international arena. The majority of countries in the world are not superpowers. They need one another to progress and they need a place and a space to coordinate and solve disagreements. The UN was designed also for this unique purpose. Switzerland is a miniature model of cooperation and consensus building. The three layers on which our social system is built have a lot in common with multilateral dynamics: we are used to considering multiple perspectives and different interests to find solutions to different realities. One important example we bring, I believe, is consensus. Swiss consensus-building is based on the principle that each party involved must renounce a small part of their potential benefit to accommodate the expectations of the other parties. The idea is to take decisions that benefit everyone to some degree, in the general interest of the entire community. There is a lot to be learnt from this model. If Switzerland gets its chance to sit in the UN Security Council in 2023, we may see some of the Swiss values reflected in the work of this importance instance of the UN Organization. I think it would be a positive experience for the UN.

If you had a magic wand what would you change about the system of the UN ?
Organizations find it hard to change because they are “organized” to do what they do. In this sense there is no magic wand, and effective leaders know that change is a continuous, daily process. Successful organizations live
longer essentially because they learn incorporate change and find new ways to evolve to fulfill their ultimate purpose. One could say that successful organizations are capable of learning how to learn, so their transform with the times.

There are two main impediments to evolution in large organizations: predominant mindset and internal regulations. These act like dogmatic principles that make changemaking difficult, even impossible. The UN is 75 years old. It has accumulated knowledge and some wisdom, but also lost flexibility and agility. Its Charter contains values that are paramount for international cooperation, but it was conceived under the spell of the great wars. When we look at the effects of the Covid crisis we have reasons for hope: both impediments were set aside in March 2020 in a matter of days. If there ever was a magic wand, I would use it to make sure the UN stays on the path of change after Covid, rather than returning to rules and business as usual until the next global crisis.

What motivates you personally to commit yourself to multilateralism
for so many years? Which personal experience makes you believe in the UN?
I see the world as system in which global issues are more important than domestic priorities and where humans must urgently recover some sense of belonging to a living planet shared with other species and nature. In this sense, looking at things from a multilateral angle is natural to me. In addition, collaboration and inclusion are proven method to solve problems, while the pursuit of domestic interests at all costs tend to create problems and inequalities. Collaboration and inclusion are among the main components of multilateralism. So, working at international level and helping others change the world for better was the obvious choice for me. Working for a global organization aligns my values with my aspirations and keeps me motivated and professionally happy.